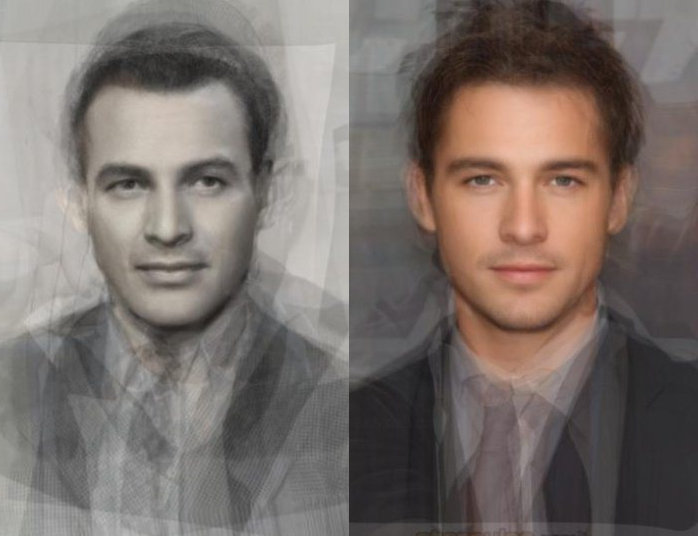 The ghost-faced character is nobody. Nobody so that he can be everybody. His face is beautiful, but with a beauty that is barely memorable, because it is average, a computer-generated number, an overlay, a face that is at the same time all faces, yet nobody’s face. The ghost face is bland, blank, symmetrical—a face of normality, of standardness; good-looking, but emanating an eerie boredom, an unsettling placidity.
With unremarkable features composing unmemorable visages, the ghost face is the perfect representative of the hero protagonist, a template, upon which the spectator can lay the fantasy of his or her own (idealized) face. Sleekly unmemorable, like the face Ken or Barbie doll, like the visage of an overly photoshopped model, the ghost face represents the flawless ennui of a beauty that is flawlessly mainstream. The three Chrises (Evans, Pratt, Hemsworth) of the recent Avengers: Infinity War are perfect examples: American übermenschen in fantasy universes who may be handsome, but whose faces are interchangeable, remarkable mostly for their symmetry, their averageness. It is this averageness that permits representation—they can represent the spectator, the fan, us—our own features to be supplanted into the face of the hero in a sort of virtual plastic surgery of identification.
Hollywood loves the ghost face, the man with the chameleonic mask and boyish smile, the woman with the smooth cheeks, straight hair and symmetrical gaze. The averaged koinophiliac idea of a person, the ghost face is a composite image, a smelting of all faces into a single idealized image, a common denominator, to fashion a face more attractive than that of any of the individual features which compose it. The ghost face is a part and parcel of an evolutionary tactic of the human species and creates a desire for the average at the expense of the individual, of the blemish. Despite remonstrances to the opposite, what is often desired is not uniqueness, but similitude.
This evolutionary tactic was recognized by Darwin’s Sir Francis Galton when, in an attempt to classify the physiognomy of the criminal face (a defunct theory later embraced by eugenicists and Nazis), he noticed that when he created composite faces, the average was always far handsomer than any of the individuals, and that the resulting criminal face was not a mishmash of torrid features, the physiognomy of man reflecting the moral rot, but in fact the opposite—the averaged face was always beautiful. The blemishes and particularities of the criminals he studied would fade, creating a characterstic-less face—a face of mud, an ur-visage, a ghost face.
The beloved ghost face is as smooth as virtual capital. Which is, of course, the point. Appearance too is an ideology, and the ghost face makes the work of the actor disappear for the sake of representation—the transformation of the actual flesh into a common idea. This shared visage is one that is always recognized but never retained in memory. It is the face of every transitory extra or disposable henchman, the faces of the merely good-looking from the afternoon soaps.
Inoffensive, non-threatening, and bland, the ghost face is the replaceable actor, a commodity that can be reused time and again. What the ghost face allows is investment without risk, because the unique, the anomalous, the odd is always perilous. Sir Galton’s more famous cousin, struggling to understand the necessity of the peacock’s markings wrote to a colleague: „The sight of a feather in a peacock’s tail, whenever I gaze at it, makes me sick!“ The same could apply to faces. We need only consider of the Hollywood’s more anomalous mugs—the Danny Devitos and Steve Buscemis of Hollywood—faces which could have failed as much as they could have succeeded.
For the ghost face to function properly it must be blank to be beautiful, fiat faces acting as templates for the imagination.  In this way the spectator may project himself or herself on the blank screen of this everyman or -woman. The ghostfaced players are numerous, and every generation revives the model in its own image. The face of a Channing Tatum as the universal American solider, the perfect hero of patriotism, in the G.I. Joe films, or Elizabeth Olsen as heroic victim, as the King Kong girl.
Although other cultures also use the ghost face, it is primarily an idea of Hollywood. The ghost face, the strategy of the mean, the adoration of the average, is as it can only be: a stratagem of the powerful. And so, other cinemas, in order to compete use other evolutionary tactics, creating other rules of the game, other types of faces.
The ghost face has a morphology which makes it ideal for the hero protagonist, but never for the madman, the serial killer, a rebel, or the villain, who needs nasty scars or bionic limbs or smashed noses or other incongruous features to come into their full, distinct villainy. Heroes need nothing but to allow us to imagine being them. But villains, always more memorable than the heroes, have inscrutable unforgettable faces, unique in their aspect, representative in its ugliness: faces that are hieroglyphs.