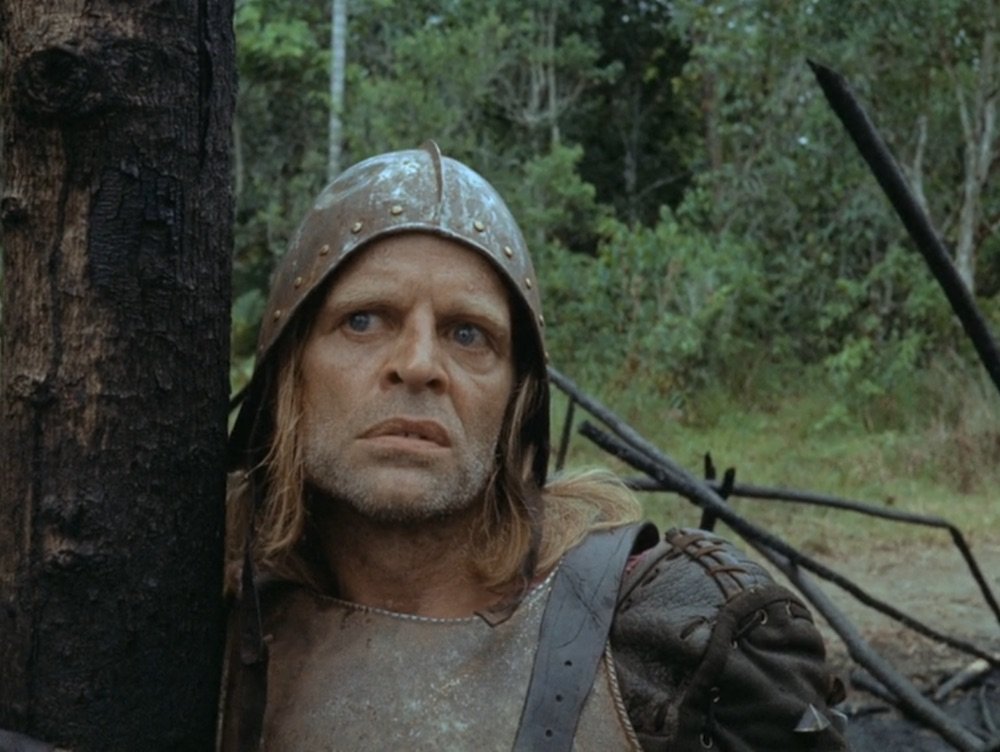 One man, a native, travels the river, and the river carries him to the destination he does not yet know he seeks. Another, the foreigner, forces the river into his mission—maps it, abstracts it. The river is the same river—potent, immense, uncontrollable—yet different. It is an element, a body to be used. In Werner Herzog’s Aguirre, the Wrath of God the river is brown, roiling. Merciless, the river is an enemy, harbinger of death and confusion. In Ciro Guerra’s Embrace of the Serpent, the same power is aestheticized, prettified. The river is no less forceful, but tamed, harmonious, harmonized, it is the river that leads the man and not the man who makes his way through the river.
And this river, this thrashing aqueous beast is the only comprehensible path in the jungle’s incomprehensibility, and the white men in both films cling to the tributary, lash onto their goals (El Dorado the mystical city of gold for Aguirre and crew; the Yakruna, mystical panacea of the rubber tree for the two white men in the other film) as a hopeful thread which may lead them back out of the incomprehensible labyrinth into which they have plunged themselves.
In this verdant and mystical tangle, the white man’s madness thrives. Detached from his natural background, severed from his civilization, unbound from morality, the white man has become all desire, all id as the unmappable abundance of the maddeningly fecund jungle dissolves his rationality. And with this loss of perspective, he clings yet stronger to his madness, to his goal: Aguirre, to the city of gold everyone knows does not exist, and Evans and Theo, the two white explorers of Embrace of the Serpent, to their mythological plant led through the jungle by the semi-willing Karamakate, dethroned prince of a now eradicated Amazonian tribe. 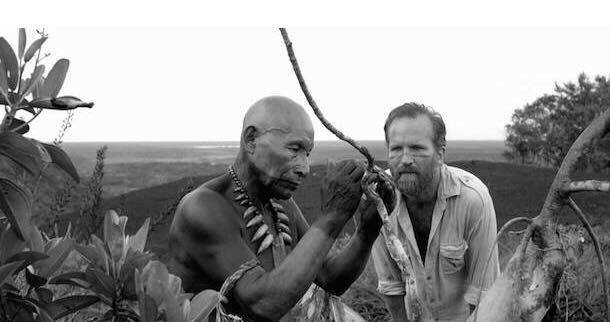 Yet this madness, this Caucasian insanity, is simultaneously the source of the white man’s power. The idea (the gold, the power, the fame) which obliterates all realities of the jungle is the selfsame force which allowed Cortés to conquer an army of thousands with but a few hundred. It is the same that allows the mad Emperor crowned by Aguirre to claim possession a land “six times the size of Spain” which he cannot even see from his bamboo throne floating on a makeshift raft with little more than a handful of feverish famished soldiers unable even to land upon the banks because they were so unprepared for its flooding.
These characters exemplify the foreignness and madness of a civilization which the jungle puts into relief. And there is nothing like the jungle to reveal the psychoses of the rituals of the white man—the contract, the writ, the declaration, the trial expose themselves as haughty follies when they take place out of context under the verdant canopy—mad rites as out of place in the jungle as the Spanish court dress that Aguirre’s daughter wears. And yes too, as Embrace of the Serpent drives home, the European’s obsession with money and maps and possessions are particular insanities too, and as the film reminds us time and again, the madness of the weak, It is the madness of those too soft to renounce upon one’s possessions, as the white men in Embrace of the Serpent cling to their belongings, too feeble to resist their lust. It is a matter of perspective: for a European like Fitzcarraldo in Herzog’s other eponymous Amazonian folly, the man’s strength is his utter obsession with his object.
Yet beyond these easy (and nonetheless true) clichés critical of Western civilization’s obsession with possession, with resources, with material, one of Embrace of the Serpent’s more perspicuous moments (and hilarious scenes) comes as Theo dictates an overly sentimental and entirely misplaced letter to his wife who he has not seen in five years and will likely never see again. The letter which justly causes Karamakate to explode into laughter at what he perceives to be as a ridiculous and pathetic affection, so very correctly identifying the pathos as the source to the white man’s insanity. For the native, it is the white man’s unreasonable sentimentality towards his wife (a feeling, cultivated) which justifies the pillage and destruction just as much as the desire to possess. Karamakate in the jungle sees easily though the constructed justifications of wife and child the civilized man uses to provide the rational ethical fodder to nourish for what is little more than his madness and cruelty. 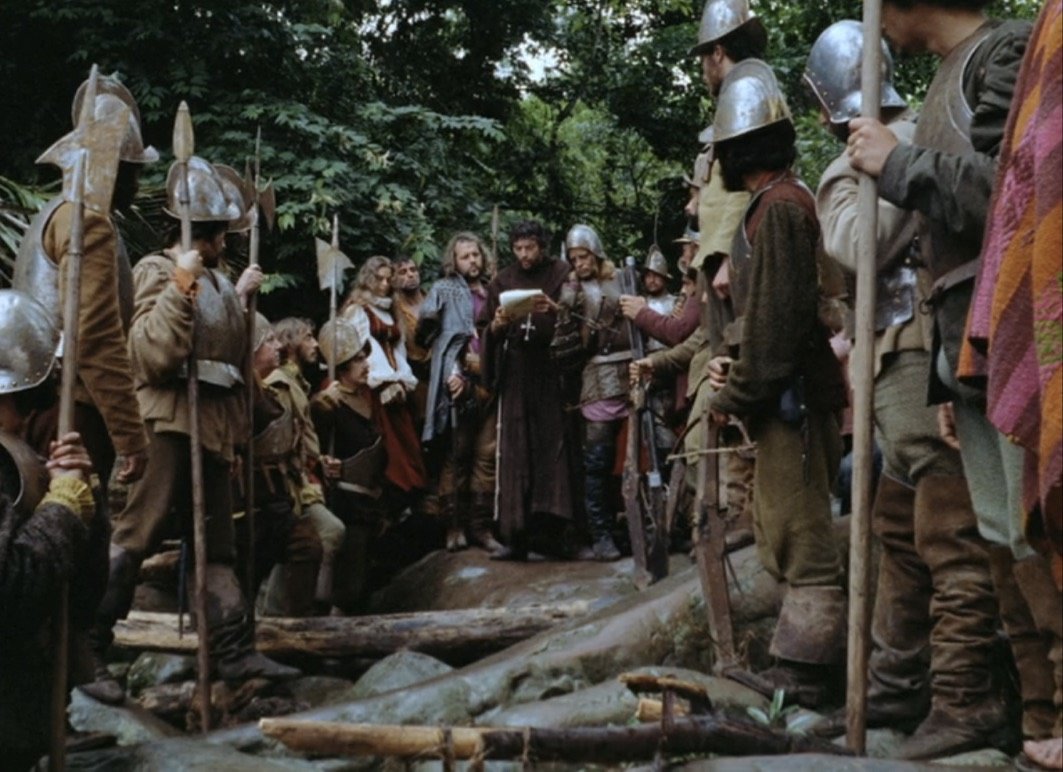 Although the madness of the two white men in Embrace of the Serpent is a banal madness, that of their indigenous interlocutor, the despoiled heir Karamakate, is more complex. His lunacy arises not from the jungle which is his element, but from the contamination of his spirit through contact with the European—the decimation of his people has severed him from the source and he becomes a chullachaqui as he calls it, a man split in two who neither weeps nor dreams; who can no longer hear the stones or the trees. Karamakate’s madness is personal whereas Aguirre’s madness is societal: the pristine madness of Aguirre (or was it actor Klaus Kinski?) is the pristine madness of civilization. And Aguirre, speaking nothing but the truth as only a madman can, holds no pretense that his purpose in the jungle is devoted to anything but war—which is why only Aguirre needs neither crown nor cross to moralize his actions. He he lives to conquer.
And why does the jungle bring to the surface the insanity of Western civilization? It is because the white man lives outside nature, and what he considers nature is in fact little more its derivatives: the gold, rubber, or medicine nature produces. Nature has become utilitarian, and the true nature of the Westerner is the idea and its manifestation, the will. This abstracted perspective can only allow nature to be either a menace to be overcome (as it is in Aguirre) or an idealized purity to be considered (as in German romanticism). Whatever it is, it is no longer ‘natural’.
Here is where Embrace of the Serpent stumbles, as the film runs up against the challenge of the portrayal of a ‘natural nature’ which it doesn’t quite seize, before finally settling for the easier romanticized alternative. To be fair, how to re-produce a non-romanticized natural in a cinematic art that is fundamentally rational, scientific and mechanical/digital (and thus, against nature) is an immense challenge. However difficult as it may be, given the context of the film’s desire to provide a sort of elegy for an alternative perspective on seen from within nature by recounting the story of a lost and fantastical tribe it was the mission the film defined for itself.
If Embrace of the Serpent innovates a response to Aguirre, the Wrath of God it is in how the newer film seizes the narrative and offers a cinematic gesture to the other which is something between generosity and naiveté. Karamakate’s mission is twofold—preservation of the memory of his people through elegy, and a pedagogical hope that the white man will, in seeing the ruins, learn from his destruction and change his ways.

Director Ciro Guerra has inserted into this tragic elegy for a massacred nation a generosity which was never in the European narrative: an offer of communion between the two people. And so Karamakate offers the world’s final existing flower of the Yakruna as a gift to the mad dreamless Evans, who was willing to attack and even kill Karamakate for that flower, so that in dreaming, he (and his race with him, one presumes) may learn again to dream and reinsert himself in the cycle of the universe. As one of the natives states in the film: “If we can’t get the whites to learn, it will be the end of us,” exhibiting a positivist hope that despite the destruction wrought, the white man can still be made to understand.
Yes, this generous act of imagining a possible dialogue must be considered fantasy, for those with whom one could have communed have already been eradicated. And the regard of Herzog’s film upon the nature of the relationship between the white man and the jungle is both more cynical and precise. It’s not that there is no communication between these two so different peoples, but that the language of this communication is the acts of violence that define their rapport. The only ‘dream’ the white man has is that of conquest (and here we get lost in some polysemy which grants the same noun ‘dream’ two meanings: the letting loose of the spirit at night, and the utilitarian goal to be attained). The Embrace of the Serpent’s fantasy that the white man must learn and can learn flies in the face that it is neither in his nature or his desire to do so. And when Aguirre proclaims with naked lust “Fortune smiles on the brave and spits on the coward,” the raw ambition of the European couldn’t be clearer.
Not that Herzog’s film is overly concerned with the ethicality of the white man’s conquest. Yet , there may be a sliver of hope. Often enough in history as in fiction, it is the conqueror who ends up being conquered. The deposed Amazonian prince in Aguirre, Wrath of God, although in chains, retains more power than Karamakate when he laments to Aguirre’s party: “I pity you too, because I know there is no way out of this jungle.”