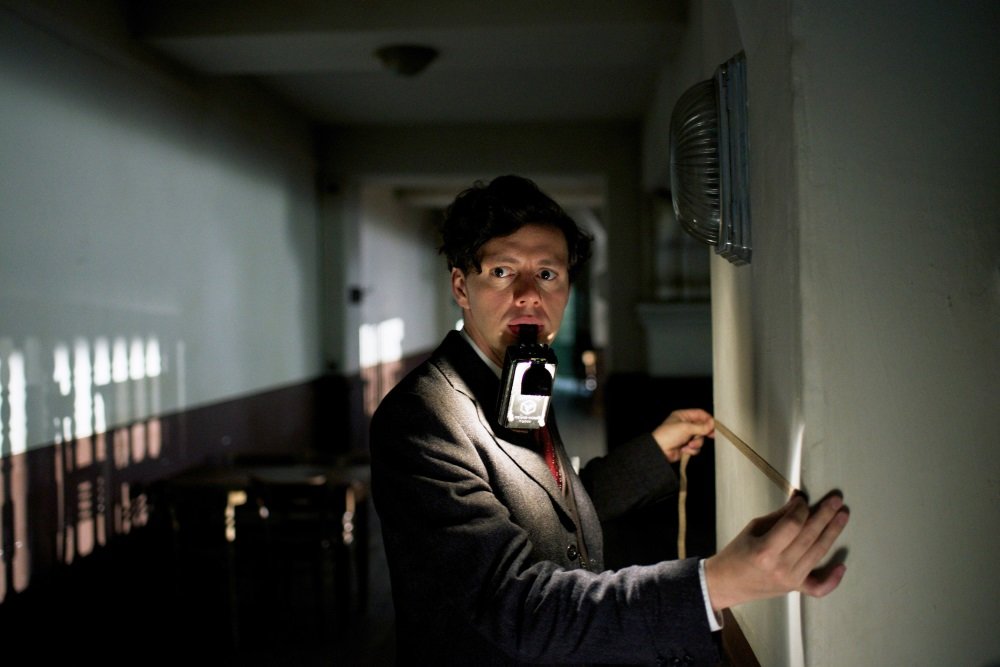 Christian Friedel’s Everyman Elser in 13 Minutes
The Berlinale would not be the Berlinale without its annual Nazifilm in competition, and last year’s WWII melodrama, The Monuments Men, was yet another testimony to the genre’s narrative fatigue: The GIs having had already cinematically liberated the Jews, the Gypsys, the Homosexuals, Europe, the World and even the Germans from themselves, are filmed fighting to save one final victim—European Art (bypassing the slightly uncomfortable and paradoxical snag that what they were laboring to save were the artifacts of same European civilization which birthed the eugenics, nationalism, and fascism that were the pillars of Nazi ideology).
This year’s Nazi drama, 13 Minutes, was no less wearied. Based on Johann Georg Elser’s failed assassination attempt of Hitler and the German high command in 1939 at the very same Munich beer hall where Hitler’s putsch had failed 16 years earlier, 13 Minutes mythologizes Elser to fit the heroic ideology of our times: as an individualist and egoist; courageous, but within realist proportions; rebellious, but without ideology. In fact, the archetypal characteristic around which this fictional Elser is constructed is his utter normality (and its identifying aspect his bland face and average haircut). In this way, Elser-the-exception is remolded into a sort of German Everyman, a proxy figure standing in for a secret desire for resistance against the fascist Nazi regime placed anachronistically in the heart of every German cinematic citizen.
Elser’s mythologization propels into mundanity that resistance which is notable primarily for its scarcity,  and its rewriting in 13 Minutes often seems like a forced passage from perpetrator’s guilt to the savior’s wishful heroism, a transformation whose value is as dubious as the absolution a priest administers to himself.
The official trailer’s caption in German reads: Er hätte die Welt verändern, “He would have entirely changed the world” (the German prefix ver bringing the change of ändern to its absolute limit). And this motto is a perfect manifestation of the film’s fantasy: not only will it deny history in pretending to portray it, but it will also actively seek to rewrite this history. As opposed to the smoothed down Elser of the film, the real-life Georg Elser quite modestly testified that he would have simply preferred to modify the Nazi regime only somewhat: “I did not want to eliminate Nazism. . . I was merely of the opinion that a moderation in the policy objectives will occur through the elimination of these men.”
Not that rewriting history poses any ethical conundrums in itself. This is after all, merely a fictional film, no less re-imagined and artificial than Tarantino’s vengeance fantasy Inglourious Basterds (2009). Yet it is exactly in the excess of Tarantino’s rewrite in which its critique and innovation lies. It does more than simply rewrite the historical events, but rather it reconstructs the values of the aesthetics through which history is represented.
Even the film’s title 13 Minutes—meaning, of course: ‘If only the bomb had gone off 13 minutes earlier there would have been no Holocaust’—evinces a pseudo-fatalistic belief system similar to that of the Nazis, who saw Hitler’s early departure from the beer hall by 13 minutes as a sign of divine providence and proof of their righteousness. And indeed, this incidence too was exploited by the Nazi propaganda machine, leading some to even wonder if Elser’s attempted assassination had been an SS set-up, designed to evince moral outrage and bring the German population in tune with the Nazi party.
The conclusion drawn from this gallant what-if of the Fuhrer’s assassination is tantamount to declaring that the entire National Socialist apparatus would have crumbled if only one man had been killed, a view reflecting the cult of the individual not unlike that exhibited by the Nazis, a cult which would reduce History to a result of the conglomerate acts of its privileged actors. 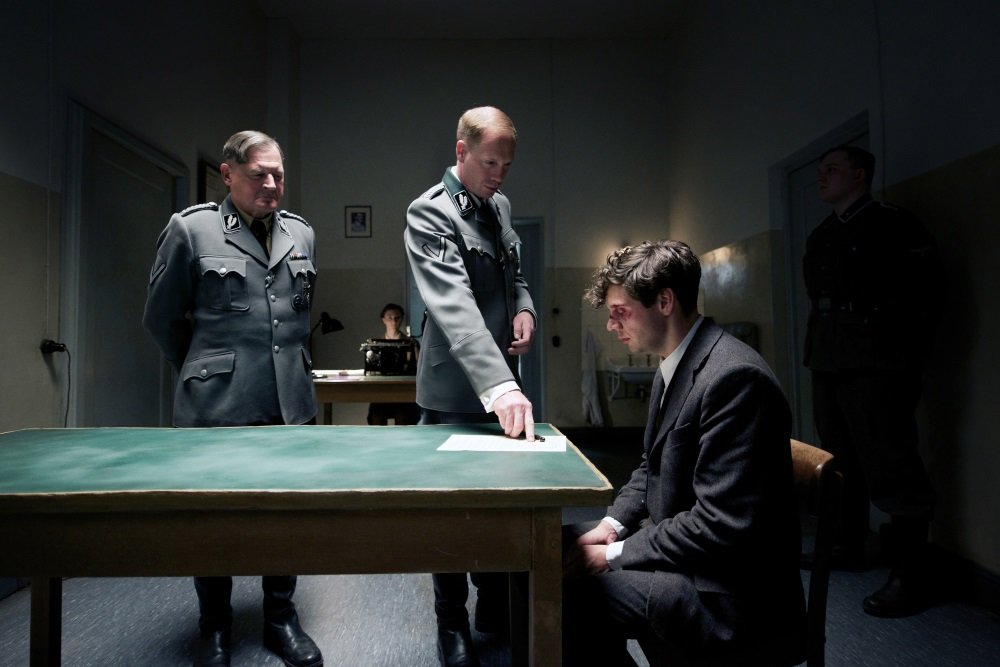 The film’s perhaps unintentional ideological equivalences with those of National Socialism are byproducts of a common aesthetic in many Nazifilms. The true protagonists in Nazifilms are often enough, like in 13 Minutes, not the individuals depicted—here, the pale wan-face determined individualist with floppy hair Georg Elser—but the Nazis themselves: their banners and flags and bureaucracy and order and goose-stepping and panzer divisions, etc. By passively reproducing the Nazi aesthetic (and hence ideology) this movie like so many other Nazifilms unwittingly reflects the Nazi’s own moral and political order, with the low-angled, power-granting Riefenstahl shots on SS officers who are all blonde, tall and muscular (an image which a brief glance through any photographic archive with non-propagandist imagery will immediately dispel, revealing dark hair, bad teeth, broken noses, and pot bellies). This fascination with the spectacle of Nazi power and easily ordered aesthetic values goes hand-in-hand with the Nazi spectacle of brutality. And in 13 Minutes we see our protagonist chained and tortured in what can only be called a naturalist spectacle of violence: See Georg Elser chained to a naked iron bedframe. See Georg whipped and caned. See Georg knocked about. See Georg injected. See Georg bleed and vomit. Entirely lacking the irony of Tarantino’s artificial exaggerations and ignoring the subtle possibilities of the ellipsis, this film too falls into the trap of proposing a ‘mere reproduction’, unconscious of what it is in fact reproducing, a world image reflecting the Manichean symbolic values so adored by the Nazis: blonde vs. dark hair, power vs. weakness, predator vs. victim… By embracing the aesthetics of the Nazi party 13 Minutes makes irrelevant its own heroic portrayal of resistance.
As Roman Polanski was preparing to film The Pianist, that production was seeking locals to play the hundreds of extras for the film. During the castings, the producers asked the young Polish men their preferences: “Would you rather play Nazi or Jew?”
Understandably enough the vast majority preferred to play healthy bright powerful uniform-clad perpetrators rather than the skinny, bedraggled, victimized, humiliated suffering Jews. Better after all, to be a strong villain than a weak hero. This choice of roles is however only comprehensible if one buys into the whole aesthetic and philosophical matrix which propped up the Nazi ideology and which perceives brutality as strength and wiliness as weakness; which celebrates blondeness as goodness, and vilifies darkness as evil; in which common accord replaces ethics, and order replaces function.
In Inglorious Basterds, the intelligence of Tarantino’s imagined American-Jewish revenge upon the Nazis is not just the carving of the swastika as an indelible mark of Cain upon the forehead of Christoph Waltz’s Nazi Colonel, but in Tarantino’s deliberate confusion of aesthetic values: Shoshanna, the heroic young heroine played by a bright-eyed, blonde and small-nosed Melanie Laurent is by nature resistant to the Nazi aesthetic. She, the blonde Jewess, does not fit into the simplified and sanitized value-system the Nazi’s used to propagandize (which of course the character exploits to infiltrate the film screening that will lead to her successful annihilation of Nazi leaders).
Tarantino’s whatif WWII film is more than a simple wished-for narrative of retribution, but is in fact a vengeance in the true sense, enacted through the aesthetics. When the German High Command begins to asphyxiate on the smoke rising from the pile of flaming nitrate-film, they are in fact choking on the fumes of their own propaganda. And when the Nazi leaders perceive the mocking face of a vengeful Jewess threatening their supposed power with the promise of hellish justice at the very moment she is enacting this justice projected on the screen upon which they had instead expected to bask in images of their own vainglory, this upheaval is strong enough to release both victims and perpetrators alike from an ossified and fallacious aesthetic which was the kernel of the calamity to begin with.